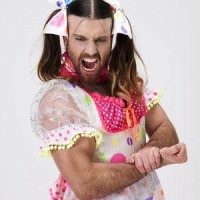 This hairy, smiling, cross-dressed man is the latest sensation in Japan, but his fame is growing beyond the borders of the Asian country!

He’s Australian and his real name is Richard Magarey, but you can call him Ladybeard. Ladybeard is a man of multiple talents, and looking pretty nice in feminine dresses is only one of them: he’s an actor, a wrestler, a martial artist and metal singer.

All these ingredients have been useful to turn him into an idol. “I’ve been wearing dresses to parties and rock shows for years. It’s good fun, and everyone has more fun when a man in a dress is at the party,” said to Tokyodesu.

“I’ve also been attacked several times, but I don’t think that reaction could be called strange, at least not in Australia.”

When he was 23, he moved from Australia to Hong Kong to pursue a career in kung fu movies, and because he was a martial artist, he got stunt training.