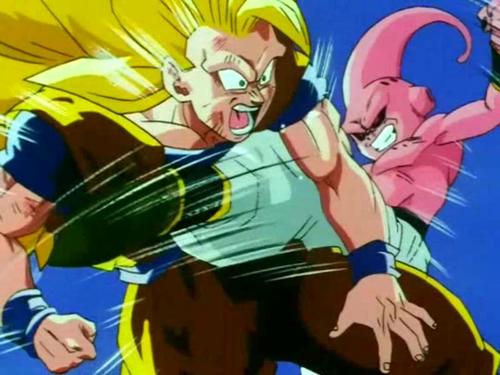 Buu is one of the most ruthless villains in all of Dragon Ball Z. He fought almost every fighter in every form and still came out on top. So it’s no surprise that the final fight against Kid Buu is a classic. With their powers depleted, Vegeta and Goku are forced to face Kid Buu, in what is likely one of the pair’s most grueling battles. The two Saiyans were barely a match for Buu at full power, but with Kid Buu never losing strength, it was only a matter of time before they would lose the battle.

It was all over when Goku charged the strongest Spirit Bomb he could, only for Buu to push it back at him. Thanks to the intervention of his friends, Goku is suddenly recharged of his energy, and is able to stop the Spirit Bomb and push it back at Kid Buu and eliminate him. It marks the end of the Buu Saga, which was jam-packed with great battles, while also showing us great new transformations like Gotenks, Ultimate Gohan and Vegito.