Deadpool is here, and it could be the movie that changes superhero films forever.

Although it isn’t the first R-rated superhero comedy thanks to films like The Toxic Avenger and Kick-Ass, it’s the first to be based on a very well-known and established comic book character — and a Marvel character at that. Up until now, all of the blockbuster superhero films have almost exclusively been PG-13 affairs with some light comedic elements, but if Deadpool is deemed a success, then fans could expect to see a lot more experimentation in the genre moving forward.

And there’s one place where fans are really showing their excitement about this: The internet, by coming up with many great Deadpool memes and gifs to celebrate the film.

Online fans have taken the idea of a Deadpool movie and run with it, and many are psyched that the movie carries an R-rating and looks like it’s going to be unapologetically violent, gory, and vulgar. They’re also pleased that the film looks like it will actually be funny, rather than containing the pathetic attempt at humor that is so often wedged into superhero movies.

But probably more than anything else, fans are excited that the movie looks like it’s going to honor the character with a very faithful adaptation. So to show just how pumped the net is, here are the 10 best Deadpool memes and gifs to come out so far. 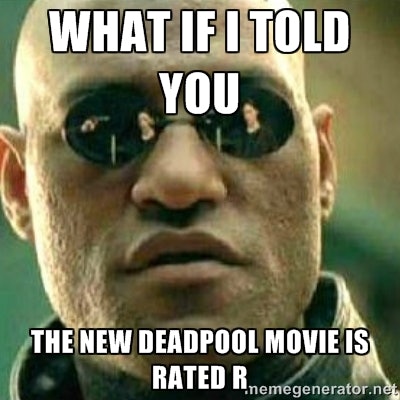 There was some legitimate worry among fans that Fox would cave and make the film PG-13 with the hopes of drawing a larger audience, but the trueDeadpool won out in the end.