Why Developers Get It Wrong

I’m told that a good number of games use this system. Thing is, a spring system isn’t necessarily effective in creating realistic physics, but it is considered a cheap, easy solution to add breast physics. Some engines even come with it built-in. Spring systems are meant to help with something called “rigid body physics,” and, well, breasts aren’t rigid. To create realistic breasts, you’ll need something called “soft body physics simulation,” and it’s a lot more taxing for a computer to calculate. 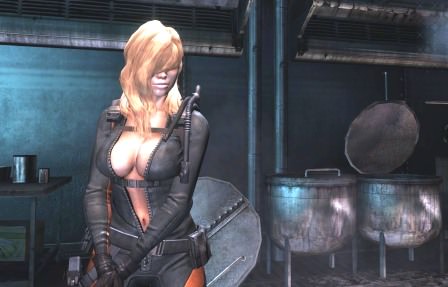 Another way to add breast physics involves animating the breasts by hand—that is, the breasts would be treated no differently than other major body parts, like arms or legs. In this case, the breast physics aren’t left up to a simulation system but instead determined on a case-by-case basis by an animator. I’m told hand-animated breasts are rarer than a sim system, due to how time-consuming it is. Animating breasts is a real handful, so to speak.

While those aren’t the only ways to animate breasts, they help explain a few things. Why distinct breast physics are so prevalent in fighting games, for example: when you only have to worry about two characters on the screen on any given moment, of course developers can add details like breast physics.

Fighting game characters characters can likely have more bones than characters in an average game. The difficulty of crafting breast physics may also explain why so many games have strange-looking breasts: developers who are interested in adding this detail can’t financially justify doing so, so they have to cut corners any way they can.